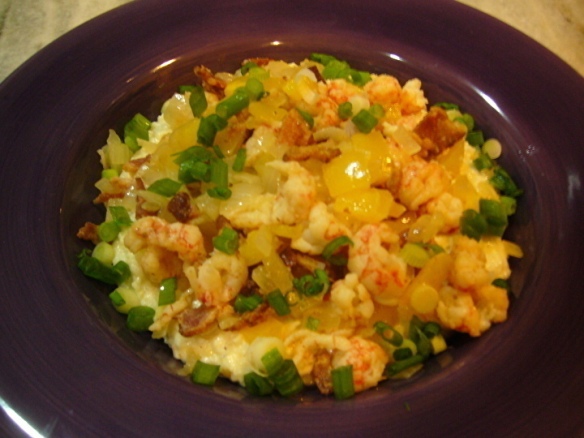 1 cup half and half

In a saucepan add the half and half, water and 3/4 tsp. salt. Bring to boil and whisk in the grits. Stir often and simmer until the consistency of cream of wheat.

Meanwhile cook diced bacon until crisp in a skillet, add the bell pepper, onion and shallots and saute until tender. Add the frozen Langoustine tails and saute until warmed through. Remove mixture with a slotted spoon and set aside. In the skillet which the bacon mixture was cooked in, pour in the wine and deglaze the pan. Slowly pour in the heavy cream, salt and pepper and simmer until sauce is thickened slightly. Pour the sauce into the saucepan of cooked grit and stir to combine. Divide among two bowls and add the Langoustine mixture over the top of each bowl. Garnish with sliced scallions.

10 thoughts on “Langoustine with Grits and White Wine Cream Sauce”