1 red onion, cut in half and sliced into rings

salt and pepper; to taste

Caramelize the red onion in the 1 tablespoon of olive oil and 1 tablespoon of butter. Place cooled caramelized onions in a large bowl. Add the remaining ingredients and toss.

Line the center of the wrap with hearty greens and add some of the filling; wrap. 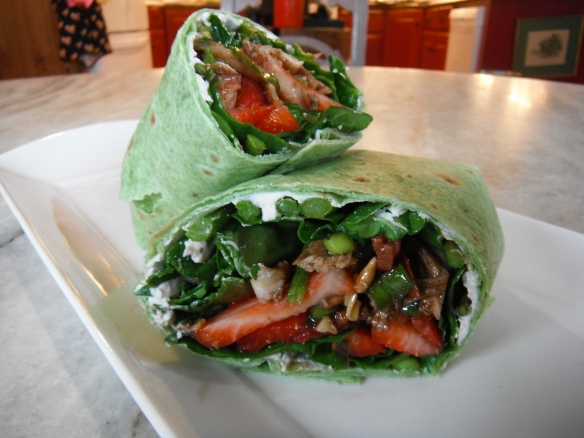 juice and zest from 1 lime

salt and pepper; to taste

Roasted on foil lined baking sheet with a drizzle of olive oil , salt and pepper ; to taste. Bake until tender, Cool. Squeeze lime juice over the top of roasted asparagus.

Combine the dressing ingredients and whisk. Adjust seasoning , if needed.

Place wraps out and divide and spread evenly the goats cheese over the top.

Divide the roasted asparagus among the cheese covered wraps. Divide evenly the baby spinach among the wraps .

salt and pepper, to taste

To prepare the tabbouleh, bring chicken stock to boil. Pour over Bulgar and cover. Allow to set for about 15 minutes until the liquid i absorbed and Bulgar is tender. Add more chicken stock if Bulgar is not tender enough and let rest again. When Bulgar is tender and stock is completely absorbed add the tomatoes, , scallions, mint , parsley and cucumber to Bulgar. Toss until combined. In a small bowl add remaining ingredients and whisk until well combined. Pour over Bulgar mixture , salt and pepper , to taste and toss. Set aside. In a small bowl combine the yogurt and feta and mix well.

Place a softened tortilla down add about 1/2 cup tabbouleh to the center, 2 tablespoons yogurt feta mixture, top with arugula then chicken. Roll up like a burrito and wrap in parchment, refrigerate.

This may also be served warm leaving out the arugula.